Inline Hockey is a fast, fun sport involving both speed and skill that is exciting for both players and spectators. It requires you to learn skating skills and stick handling skills – in return you get improved fitness, great balance and lifelong friends in a fun fast-paced environment. 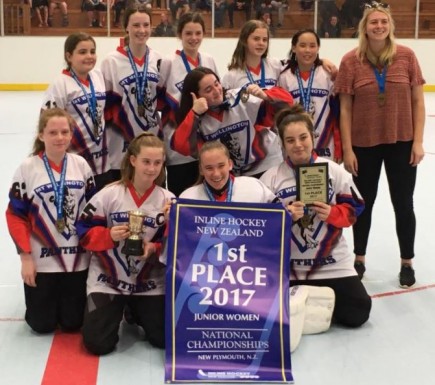 Inline Hockey has similar concepts as Ice Hockey, but is recognised as a sport in its own right.

Each team generally consists of up to 12 players and a goalie. Only 4 skating players and one goalie can be on the rink during game play. Players are subbed on and off the rink throughout the game at varying intervals at the coach's discretion.

Each team attempts to get the hockey puck into the opposing team's goal with each goal being worth 1 point.

How do I learn to play?

During school term time come join in a Friday night Learn to Play Hockey session - there is no commitment, we've got the gear (including skates). Come try it out!